Recently, my local culture centre was doing a rerun of classic films, and a few friends and I went to see Breakfast at Tiffany’s. I probably hadn’t seen this film since I was a kid so I thought it be a chance to refresh my viewing of this classic since it was an open air theatre, and most importantly a free showing.

The thought of reviewing classic books and movies has been in the back of my mind for some time, so what better way than to start with a film that is considered highly iconic in glamour circles and as well as an ode to love?

I did a little googling and was reminded that Breakfast at Tiffany’s had been quite a hit at the Oscars back in the day, receiving, Best Dramatic or Comedy Musical Score, Best Original Song for Moon River (which is an awesome song no doubt) while Audrey Hepburn was nominated for Best Actress.

I think part of the reason the film was such a hit in its day, was because it was written by Truman Capote, one of the most celebrated minds of his time, though from what I understand, the book and the film have many differences. Admittedly I’ve never read any of his work, though I have been meaning to read In Cold Blood since forever,  and I am aware of his status and impact.

I won’t go into details regarding the plot, which is all over the web, but in a nutshell we are told the story of a socialite, looking for a rich husband. Classic ‘girl needs boy’ to keep her in the lavish style to which she is not really accustomed. Holly is essentially a party girl who dates men who tip her to go to the powder room and also visits a mafia boss in Sing-Sing prison from whom she transfers messages to his lawyer for a small fee. Between parties she whiles her hours away by getting plenty of beauty sleep, with the help of some highly ridiculous ear plugs, and going to Tiffany’s where ‘nothing bad ever happens when the mean reds strike.’ 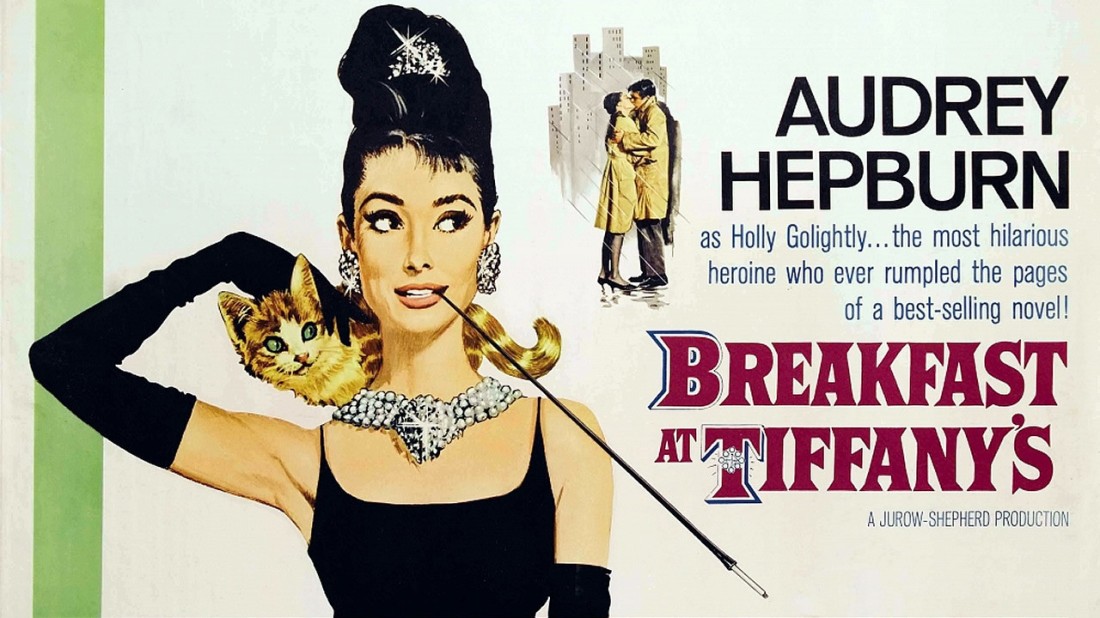 When handsome Paul comes along, she takes a shine to him because he reminds her of her brother and the two strike a friendship, which eventually turns to love, which then turns to rejection-she is looking for a rich guy after all-culminating in a big “get your shit” together lecture from Paul to Holly. Why does Paul feel the need to give a Holly a piece of his mind? Because throughout, she behaves like a spoiled brat.

I know I’m judging this film with modern eyes, but I did try to view it with a Mad Men perspective, where women were mostly house bound, or at best secretaries in some office, condescended upon and made to feel powerless and inferior, and I guess that for the period, the independence of a socialite making a buck any way she could, might appear empowering and therefore propel the film towards iconicness. Correct me if I’m wrong.

What I don’t get however, is why it’s still iconic today, almost 60 years later, where women are in many ways still struggling to overcome those stereotypes. Ironically, modern women still face many of the challenges and injustices they did back then, particularly in places like the States where maternity leave is non existent, pay inequality prolific and condescending attitudes not a thing of the past. So again, why is this film still considered a classic?

And if we were to ignore the hair-brained heroine, there are two more points that are so wrong with this movie. One, was the “small” issue of the abandoned cat in the alley when she has her aforementioned hissy fit. I know we’re told she doesn’t own him so feels like she’s setting him free, but it was such a jarring scene for someone who loves cats. You just don’t do that to your pets ‘cause animals get scared when things change.

Finally, the thing that bothered me the most however, was the portrayal of Mr Yunioshi as the stereotypical Asian caricature. The mind boggles that even as recently as 1961 something so offensive was consigned to film, and a film that is highly celebrated no less! Where do I start? The dayglo skin, the fake squinty eyes, the buck teeth and the anal attitude of a character who can’t decide if he’s the offensive stereotype of a Japanese or Chinese immigrant, (I mean they all look the same right?) and one which makes you cringe, when I assume, the intention was to make you laugh. I dread to think what was going on there, even in 1961, but once again, it doesn’t fare well anymore; assuming it once did.

On a side note, you might have heard about the MAC cosmetics furore that exploded on the net last week where an African American model’s lip size was  racially mocked after MAC instagramed a pic of her wearing one of their shades. One of the reaction videos I stumbled upon online (regretfully I couldn’t find it again in order to verify) rightfully featured several tweets of incensed black women condemning the abuse and expressing pride in their heritage, which would have been a good and meaningful gesture if it had stopped at that, but in the end they closed off with a picture of Holly Golightly, which I’m guessing was put there to symbolise poise, becauty etc. Shame about the missed racist undertones though… So prolific is the idea that this film embodies feminine power, that whoever made it didn’t think twice about how racist it was as a whole.

So, just because something might have been iconic in its time, doesn’t mean it has to hold the title for ever. Perhaps way back when it came out it was seen as the ultimate in female emancipation, the farm girl who strikes it out on her own to become an “independent” socialite in search of herself (though she’s really looking for Hubby McBucks), but well over half a century later, the one dimensional, erratic, purposely vacant headed Holly character smacks of misogyny. The casual racism and animal abuse peppered throughout the rest of the film just add insult to injury. Have we not moved on at all?

Bathory’s Secret is Romina Nicolaides’s first novel in the Affliction series of books, a reexamination of the Vampire genre married with History, in a multitude of real and imaginary settings bringing to life a visceral realm unlike any other. The series offers a more existential approach to the field coupled with sensational plot twists, fascinating characters and beautiful settings. Romina was born and raised in Cyprus by her bookworm and History enthusiast father who fascinated her with countless stories from ancient Greek mythology to its medieval patchwork of Byzantine, Venetian French and English Kings and Queens flooding her imagination with people and events from all time periods. Coupled with her fascination with the mystical and the occult she began writing stories leading to her first novel in 2013. She lives in the United Kingdom where she continues to be inspired. View all posts by Romina Nicolaides